The first piece of good news for runners and newcomers looking to train for and compete in a local race — be it a 5K, 10K, half-marathon or even a full marathon — is that there are so many options. The calendar for Northwest Indiana is packed with races of varying distances all throughout the year, but especially in the summer and fall. 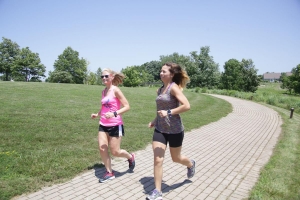 The second piece of good news is that there is no shortage of training advice out there. Websites, magazines and doctors — not to mention every friend or acquaintance who has laced up a pair of shoes — has a list of do’s and don’t’s to help keep your race preparation on course.

But therein lies the downside. What works for one runner won’t necessarily work for another, and much of the information that a runner will read or hear is as likely to be contradictory or plain false as it is to be genuinely helpful.

Though every runner is different, many of the basics are universal. So we worked with a group of Region health experts and runners to compile a set of recommendations to get ready to run:

While running is obviously a great cardiovascular boost, Timothy Williams, physician’s assistant at Great Lakes Orthopedics & Sports Medicine in St. John, says it’s important to get your physician’s OK before training to race.

One of the keys to successful training is the right shoe. Deanna Grimes, public relations guru for the Calumet Region Striders who has completed 21 marathons (that’s more than 550 miles), recommends hitting a local running store such as Fleet Feet Sports in Schererville or Extra Mile Fitness Co. in Valparaiso to be properly fitted before embarking on any training regimen.

From a physical and mental perspective, expanding your training to include activities other than running can be beneficial.

“Remember that running should not be the only part of your exercise routine,” Williams says. “Strength conditioning and stretching routines are also very important.”

“It’s OK to run by ‘feel,’ ” Marialena Nagel, Calumet Region Striders board member and veteran runner, adds, noting the mental benefits of switching up one’s routine. “Don’t be afraid to run for a certain length of time like 30 or 60 minutes, instead of always trying to reach a certain distance.”

Speaking of the mental aspect, getting your body in the best possible shape for a race is great, but you should also feed the brain. Building the psychological strength to push through those grueling training runs can be just as important as building one’s muscles. Grimes says running with groups such as the Calumet Region Striders and Girls on the Run keeps her focused and committed as she adds miles.